China is leapfrogging the world when it comes to the environment.

Earlier this month, one of China's largest conglomerates held a conference in Beijing to address what the company plans to do in support of the government's environmental targets.

One by one, every one of the company's dozens of large subsidiaries, from its financial arms to its specialty steelmaking unit, announced ambitious goals.

Such events are now a feature of corporate life in China. Beijing's ambitious plans to move to peak carbon emissions by 2030 and net zero emissions by 2060 may be a top-down initiative from Xi Jinping himself, but it is being widely embraced not just by the most privileged economic entities, but private entrepreneurs and civil society at large.

Outside China, though, there is widespread questioning of the authenticity of Beijing's commitment, as well as its ability to meet its objectives. Many analysts also question whether a commitment to greener growth inevitably means slower growth.

"China could be trapped in contradictory goals of economic development and emissions reductions," noted Helen Qiao, chief Asia economist for Bank of America in a recent report.

That likely is far too pessimistic. China is well on its way to leapfrogging the rest of the world in everything to do with a cleaner environment. One of Beijing's most powerful tools is by forcing companies to focus on environmental, social and corporate governance, which has become a major catalyst for higher-quality growth, improving the standard of living for its people and retain its edge as the manufacturing workshop of the world.

China will use recent technological advances to make itself cleaner and greener, while simultaneously keeping its edge in value-added manufacturing.

Before last year, China was spending 2.2 trillion yuan ($341 billion) every year on environment-related investment. Beginning in 2030, it plans to increase that to almost 4 trillion yuan. Moreover, for every unit of gross domestic product, China has been reducing carbon emissions at an accelerating rate, leading some economists to wrongly suggest that growth in China was slowing.

China already is the world's workplace for making solar panels and wind turbines, the innards of the renewables that will inevitably replace fossil fuels, with its companies accounting for up to 80% of all global production. Given their scale, the cost of renewables becomes more affordable and relatively attractive compared to coal with every passing year.

China has equally ambitious goals for electric vehicles, indeed analysts estimate that 20% of all car sales will be electric by 2025, at a time when other leading carmakers elsewhere are still more vested in hybrid vehicles. Ongoing urbanization increasingly means smarter cities with new infrastructures such as widely available charging stations. 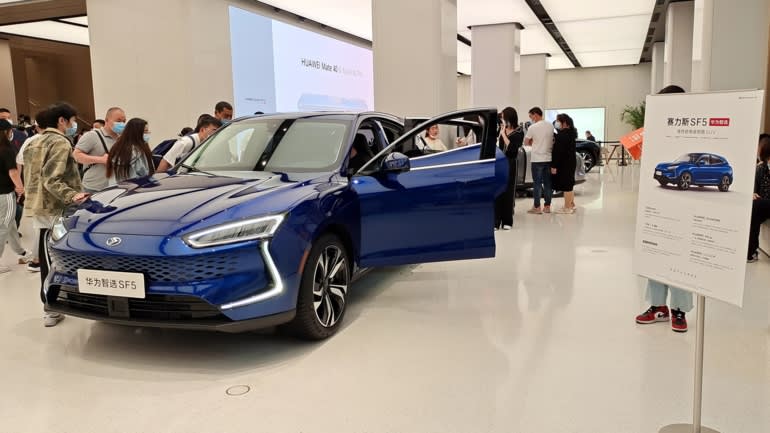 A Seres Huawei Smart Selection SF5 electric vehicle is on display for sale in Shanghai on May 3:
20% of all car sales will be electric by 2025.   © VCG/Getty Images

That is good news not only for China and its neighbors -- and the rest of the world. Today, the mainland accounts for 29% of all global carbon emissions.

Climb a mountain today in the northern alps of Japan and new snow is covered by acid rain carried by easterly winds from thermal power plants across the sea. Indeed, many analysts contemplating toxic air, polluted rivers and water shortages leading to drought and sandstorms, until recently wondered if China was on the edge of some tipping point into environmental Armageddon.

But China has been steadily reducing its dependence on coal, with the carbon emissions that follow set to decline from their peak by 2030. Moreover, China is already in the process of transforming its old economy sectors.

In the past, for example, steel making accounted for 17% of the country's total emissions, or 5% of all global emissions, according to data from Goldman Sachs. But the combination of stern edicts on capacity cuts, and cleaner technologies being introduced in steel furnaces, are reducing those emissions over time. The same is also true for aluminum and cement.

There will be winners and losers from these trends -- beyond newly unemployed coal miners who number somewhere between 2.7 million and 6 million workers. Fossil fuel-rich regions in China's heartland will inevitably become poorer, leading to widening disparities with ever wealthier coastal provinces.

There will be defaults among companies in discredited sectors -- as well as in those new economy companies that are mismanaged. It is hard to imagine that every new electric carmaker or battery producer will succeed. Inflation is already rising as new environmental regulations force capacity cuts in commodities processing, pushing up prices.

Still, even as China voices these ambitious targets, it is still building coal-fired plants and -- ironically -- the processes involved in producing things like solar panels are not themselves always the cleanest technology. Despite the inevitable pain, though, most Chinese people believe that green, not oil, is the new gold.